← The new Chappaqua Performing Arts Center is starting off with a bang Taking Lonely Town, Lonely Street To The City of Brotherly Love → 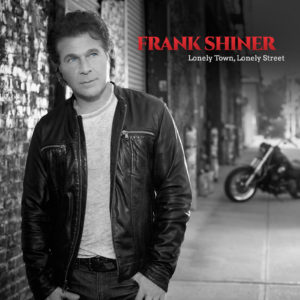 “I decided to do blue-eyed soul’ for my second album,” explains the New York resident, using a term that was first coined by renowned black radio personality Georgie Woods in the mid- ‘60s when referencing The Righteous Brothers.“ I’ve always been intrigued by and loved the genre which has really morphed into including artists like my heroes Hall & Oates, Amy Winehouse and others.

Indeed, this latest album showcases Frank’s artistry as an interpreter of timeless material delivered with heart and from the soul. Stay up to date on Frank Shiner by following his website- www.frankshiner.com and pick up “Lonely Town, Lonely Street” on Amazon today- https://www.amazon.com/dp/B06ZZ2YD1J/ref=cm_sw_r_cp_ep_dp_rBH-yb58KM02Q

Learn more about Frank in the following All Access interview:

Where does this interview find you today? Is there music playing in the background? If so, what is it?

Today I’m  preparing for my May 20th debut at World Café Live in Philadelphia. The album releases the day before the show! It’s an important show for me.  I am laying out the set list and lining up the musicians, equipment, stage plot etc.  I have Pandora streaming in the background… Generally I am streaming soul music but today I happened to be streaming blues/rock.  I love influence from all genres.

Growing up, did you always want to be a musician? Can you recall your earliest musical memory? Could you see yourself doing anything else today?

Growing up in Mountaintop Pennsylvania, I didn’t have a whole lot of exposure to music at a young age.  But I had the advantage of being very bored and needing to occupy my time.  I would make up melodies and rhythms regularly to occupy myself.  I still remember the ones I made up.  I found old Frank Sinatra albums of my father’s and would put them on the turntable and practically wear through the grooves playing them over and over. Then I managed to get my hands on a “Frampton Comes Alive” album and I think I actually did wear that one out.

So my musical influence was very wide and varied.

Let’s talk about your sophomore album, “Lonely Town, Lonely Street.” What was it like putting this collection together? Did anything at all surprise you about the process? How do you think you have grown as a musician on this album and compared to your previous one, “The Real Me”?

The process of making this album has been incredibly fulfilling.  I don’t know how to explain how I have improved as a musician except to say that, with every year of life that passes, and every experience good and bad, I seem to be able to feel more emotion and find more emotion in the music.  It is in that expression that I have grown.  Surprises?  There were a number of them… But the biggest surprise was, during the recording process, I suddenly realized that every single song on the album had to do with “love”… They are certainly not all love songs however.  It was love including the good and the bad.  I even wrote my live show around a love theme because of that.

How did you go about selecting the songs to re-imagine on this album? Was it difficult to narrow them down? Are there some songs that didn’t make it onto the album that you hope to use on a future collection?

My A&R person was Mitchell Cohen. He was head of A&R for Arista Records, Verve Records, and Columbia Records… I always refer to him as “the walking encyclopedia of music.”  He sent upwards of 100 songs.  I simply listened and listened.  I found the songs that spoke to me, lyrically and then I looked at them musically to see if I could do anything interesting with them.

Yes I found a number of other songs that didn’t make it on the album but my guess is they will make it into a live show for sure!

I saw on your Facebook page that you recently received praise from Tony Joe White about your version of his song, “Rainy Night In Georgia.” What did that mean to you to hear from him about it?

Let me tell you something… It’s an honor and a privilege to re-interpret a beautifully written song.  My goal is to always do the song justice.  I never feel like I’m trying to make the song “better”… Just “different”… and put my own spin on it. You never know how the original artist will feel about it.  To hear from somebody of the caliber of Tony Joe White was a milestone in my career and a day I will never forget.  And now, to add to that, Gene Cornish, one of the original founders of the Young Rascals heard my version of “How Can I be Sure” and he liked it so much that he came to one of our shows and got on stage and played with us!  He said “Frank’s version of our song is very special to me.”  An artist lives for moments like that and I just got two in a row! Yes, I’m still pinching myself.

I’d love to more about what it was like returning to music after your wife’s battle with cancer? How do you think that influenced you as an artist and performer?

The horrible experience of helping somebody you love survive cancer is a learning moment.  I will never forget the feeling of wishing I could take it away and live through it for her.  Also, watching and being sensitive to how it affected my 10-year-old daughter at the time tends to really deepen you as a person and makes you look at life very differently.  And it makes you appreciate the good things in life.  With any art form… that type of struggle will spill over into your art.

If I made a list of venues I would love to play we would be here all day!  We are just in the beginning stages of planning a tour.  I’m playing World Café Live in Philadelphia on May 20 and the  beautiful Feinstein’s 54 Below in New York City on July 8th.  This will be my fourth show there and I always love to play that venue.  I just did a show at The Cutting Room in New York City and we sold out!  And then I did the Chappaqua Performing Arts Center and we had over 400 people in a packed theater.  The live show is getting tremendous reactions from the audience.  I could not be happier.

What do you consider your favorite live performance to date? What do you think makes the best kind of show for you?

So many of the shows are memorable but the last one at The Cutting Room when Gene Cornish joined us on stage is absolutely a stand out.  A responsive audience is the best experience for a performer.  I believe I have the best audiences ever.

My shows always seem to have a message of “you can do anything”… “Follow your dreams”… They deal with reconciliation and hope for the future.  Even the sad songs, when placed in the context of the rest of the show, give people hope for the future.  It’s a tough world out there… If I can inspire someone with even a shred of hope, then I have done my job.

Is there anything else that you would like to share with our readers about yourself or your music?

I would just like them to know that I am a purist.  I deal with real human feelings… real emotions… And most importantly, real music.  I don’t like all the artificial techniques to make somebody sound different than the instrument with which they were born.  Like the title of my first album, I want them to know that they are seeing and hearing “The Real Me.”