The Popular Entertainer – Currently A Resident of Chappaqua, NY –
Will Return to His Hometown of Wilkes-Barre, PA To
Appear in Their Christmas Parade November 19

NEW YORK – Oct. 28, 2016 – PRLog — A popular performer and fast rising recording artist since the release of his critically acclaimed 2014 debut album The Real Me, Frank Shiner – a two-time L.A. Music Critic Awards winner – once said, “I don’t do covers. I reinterpret songs. If I can’t put my own spin on something, I won’t do it!” His growing legion of fans is in for a mega holiday treat with the release of his fresh twist on legendary blues singer Charles Brown’s classic “Please Come Home For Christmas,” dropping October 28. 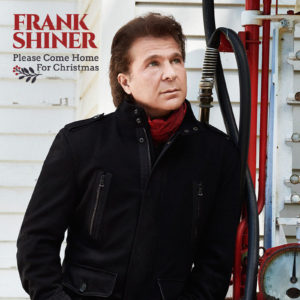 A portion of the proceeds from the sale of the track will go to Full Circle Home (www.fullcirclehome.org), a highly respected military charity dedicated to honoring, celebrating and connecting our troops and their heroes at home. Full Circle Home is a 100% volunteer not for profit organization that connects deployed service members with their loved ones across the country and on bases around the world. Since 2007, the organization has helped over 17,000 troops send holiday gifts and love notes to their heroes at home. Executive Director and Founder Vickie Dufree says, “The holidays are always a particularly difficult time to be deployed, Full Circle Home brings the troops home in spirit and Frank’s song embodies that feeling.”

The song is currently receiving airplay across the country.“I knew for my next project, I wanted to do a blue-eyed soul album, and this song is perfectly in line with that spirit,” says Shiner, who will be releasing his highly anticipated sophomore set Lonely Town, Lonely Street March 17, 2017. “I listened to many, many Christmas songs, and felt that this one was the perfect foreshadowing of what the album was going to be. It’s also one of those rare Christmas songs that, even if you changed the lyrics and took Christmas out of it, it would still be a great song.”

Three weeks after the release of “Please Come Home For Christmas,” Shiner will be fulfilling the timeless message of the song, returning to his hometown of Wilkes-Barre, PA to appear in the city’s 2016 Christmas parade Saturday, November 19. The parade will be telecast locally on WLYN-TV.

In honor of Shiner’s success as a hometown boy fulfilling his dream of becoming a beloved performer and popular independent recording artist, former Wilkes-Barre Mayor Tom Leighton honored him by declaring May 15, 2015 “Frank Shiner Day” where he was the headline act at the 60th Anniversary of the Fine Arts Fiesta.

“After people heard my last album,” Shiner says, “I received letters and comments from people who knew the story of how I got back into music, sharing how they were inspired to get back to teaching, writing, and music and how they have gone back to those things in their later years. If I can be motivation for other people, what more could I possibly want?” The single is digital-only release and will be available at download stores and streaming platforms everywhere.